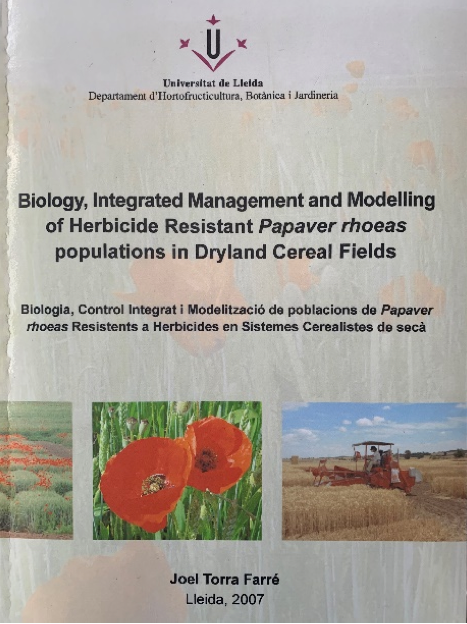 The life cycle and the management options for different herbicide resistant Papaver rhoeas L. populations were studied in cereal fields in dry-land areas of north-eastern Spain. Two fields were known to contain populations resistant to 2,4-D, and another one had a population resistant to 2,4-D and tribenuron.
Results of this research indicated that seedling emergence, growth, seed production and dormancy of seeds differed among cohorts of P. rhoeas, showing the importance of emergence time and crop competition on the fecundity and demography of this species. In later emerged cohorts and/or in the presence of barley competition, development, biomass accumulation and seed production were reduced. Furthermore, germination of harvested seeds was less for earlier than for later emerged cohorts. It seems important to prevent seedling establishment of P. rhoeas during the period corresponding to the first flushes of seedling emergence (September to January). Cohorts emerged mainly during the crop sowing are the main target for weed control management strategies. Moreover, seeds produced in autumn-winter with higher seed dormancy will be the main contributors to the seed bank and weed population in next generations.
Field trials indicated that very good control of herbicide resistant P. rhoeas in winter cereals can be achieved with trifluralin plus linuron and pendimenthalin plus linuron as pre-emergence treatment. In post-emergence, the best performances were achieved with the mixture bromoxynil plus ioxynil plus mecoprop.
A mathematical model was used to describe the behaviour of the population dynamics of P. rhoeas and to predict the effect of various control strategies and integrated weed management (IWM) scenarios. Either the application of POST herbicides, PRE herbicides or their yearly rotation did not prevent the population increase. Using various types of cultural control tactics (delayed seeding, harrowing, and fallow incorporation), resulted in different trends in the overall population, depending on the techniques and combinations analysed. Simulations showed that delayed seeding, fallow incorporation and herbicides applied in pre-emergence are the best techniques to employ in IWM programs, always using a combination of these and other more common practices.
A bio-economic model for P. rhoeas for dry-land cropping systems in Spain has been developed and it can be used to evaluate weed management scenarios by investigating the implications of different tillage, fallow and cereal rotational sequences and of constraints on herbicide availability. Model validation showed that PRIM is sufficiently accurate for predicting P. rhoeas population dynamics. The most sensitive biological parameter for population dynamics prediction is the P. rhoeas emergence from 0 to 5 cm, followed by the initial seed bank density within the 0 to 5 cm soil depth. The sensitivity analyses showed that strategies linked to cost related parameters (i.e. tillage operations depending on fuel cost), and to profit related parameters (i.e. price and weed-free yield of cereals), will drive management decisions. Using PRIM, farmers will realize that reducing costs and increasing incomes are the objectives.